As Burnt Horizon just went live, developers haven’t revealed much about the new season. In the year four roadmap, Ubisoft announced the nationalities of all operators coming to Rainbow Six Siege in 2019. Alongside a rework for Kafe Dosteyevsky, season two will introduce operators from Denmark and America. 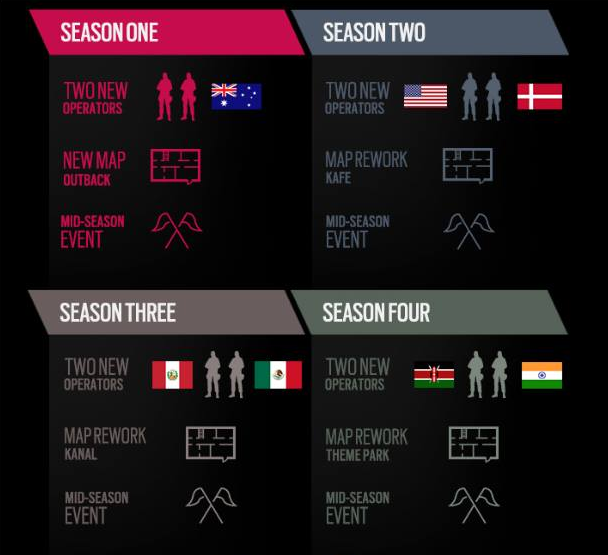 As shared by coreross, a ResetEra member has revealed information about the new operators. According to the leak, season two will add a Danish attacker and a Secret Service defender. Furthermore, a tiny description of their gadgets has been shared.

The attacker is allegedly “invisible to cameras”, and “has a sort of silent step similar to Caveira”. While an operator with multiple abilities isn’t something new to Rainbow Six Siege, the Danish operator definitely seems vastly different when compared to previous operators. To be invisible to all cameras definitely seems like a strong ability, but such a small description doesn’t tell us much about the Dane.

The leak further claims that the defending operator is a member of the United States Secret Service. If true, then this operator would be Rainbow Six Siege’s third DLC character of American origins. Regarding their ability, the operator reportedly “has a special eyesight that bypasses flashes and smokes”. If you’re thinking that this sounds immensely overpowered, you’re probably right. As is evident by Ying, the ability to see through flashes can extremely powerful, but smokes too? As the leak kept things short, there must be some sort of balancing factor tied to this operator’s ability.

As far as the credibility of this leak goes, it’s surprisingly strong. Prior to the launch of Burnt Horizon, the same leaker shared information about Gridlock and Mozzie, and it was quite accurate. At that time, the operators seemed silly and unrealistic, but as we now know, that turned out to be true. However, it’s definitely possible that there is no truth to this information. As such, don’t consider this leak to be any sort of official confirmation.