Some World of Warcraft players are encountering the ‘WOW Error #134 (0x85100086) Fatal Condition‘ when trying to launch the game. Error #134 is typically encountered when the main game executable is prevented from making changes to the game file. 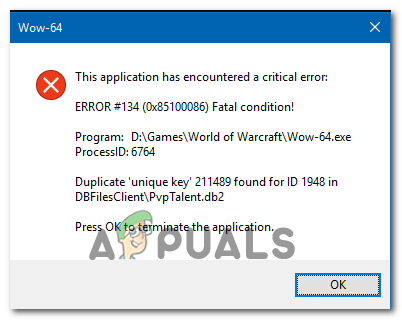 There are several different causes that might end up triggering this startup error message with World of Warcraft:

As it turns out, one of the most common causes that will end up causing the ‘WOW Error #134 (0x85100086) Fatal Condition‘ is a permission issue that’s being facilitated by insufficient admin privileges. As it’s been reported by other users in a similar situation, this problem typically occurs with the World of Warcraft launcher (Blizzard Battle.net desktop app).

If this scenario is applicable, you should be able to fix the issue by forcing the game launcher to run in administrator mode. This operation will end up fixing various scenarios in which this error code ends up affecting installation, patching, networking, and start-ups.

Follow the instructions below in order to force Blizzard’s Battle.Net app to run with administrative privileges in order to resolve the ‘WOW Error #134 (0x85100086) Fatal Condition‘:

In case the same problem is still persisting and you’re still seeing the ‘WOW Error #134 (0x85100086) Fatal Condition‘ when you try to launch World of Warcraft, move down to the next potential fix below.

The game’s cache folder is often responsible for the apparition of this particular issue. Some users that were also encountering the WOW Error #134 at every startup attempt have confirmed that they were able to fix the problem by navigation go the game’s location and deleting the cache folder.

This operation will end up eliminating any temp file that might serve as the root cause of the apparition of this issue. The next startup will force the game to launch without any remnant data from previous launches.

If you want to give this fix a try, follow the instructions below to clear the Cache folder of World of Warcraft:

In case you still end up seeing the Error #134 (0x85100086) after the initial startup fails, move down to the next troubleshooting step.

Depending on your UAC (User Account Control) settings and whether you applied custom attributes to files belonging to World of Warcraft, you can expect to see this error code due to the fact that the main WOW executable (WOW.exe) and other sub-components are using the Read-only attribute which prevents the game’s launcher from modifying and updating the files.

If this is the case in your particular situation and a new update is available, you can expect to see the Error #134 (0x85100086) after a failed attempt to modify these files.

In the event that this scenario is applicable to your particular scenario, follow the instructions below to fix the error by getting rid of the Read-Only attribute:

If the same problem is still persisting, move down to the next potential fix below.

As it turns out, the Error #134 (0x85100086) Fatal Condition in World of Warcraft can also occur if your 3rd party suite ends up blocking the connection between the game’s launcher and the game’s server. In the event that this is caused by a false positive (you AV is overreacting), you can fix this elegantly by whitelisting Blizzard Battle.net Desktop app + the main WOW executable from your AV settings.

Note: If whitelisting doesn’t work, you will need to uninstall the 3rd party security suite altogether in order to be certain that you’re not dealing with an AV-induced security interference.

Note: The instructions below will work for every recent Windows version (Windows 7, Windows 8.1 and Windows 10)

Note 2: If you are using a 3rd party Antivirus + firewall, you need to search online for specific steps of whitelisting the two executables or follow the second guide below for steps of uninstalling it.

B. Uninstalling 3rd-party suite via Programs and features

If you are using a 3rd party Antivirus that doesn’t allow you to whitelist items or you’re looking for to get rid of it, follow the instructions below:

If the same problem is still occurring, move down to the next potential fix below.

As it turns out, Error #134 can also be an underlying signal that you are dealing with some type of damaged game files. This is typically reported to occur after a failed attempt to update the game or after an overprotective AV suite ended up quarantining some files.

Fortunately, Blizzard provides a built-in tool that’s capable of resolving the vast majority of corrupted game files automatically. It’s built straight into the Blizzard Battle.net app and some users have confirmed that it allowed them to fix the Error #134 (0x85100086).

Follow the instructions below to run the Battle.net Repair tool:

In case you still end up seeing Error #134 (0x85100086) even after trying to repair your game files, move down to the next potential fix below.

If you haven’t updated your OS build in a while and you think this scenario might be applicable, try installing every pending update and see if this ends up fixing the issue for you.

Follow the instructions below to update your Windows version to the latest build available:

In case you still end up seeing the Error #134 (0x85100086) Fatal Condition when you attempt to launch the game, move down to the next potential fix below.

A driver incompatibility issue can also be the root cause of Error #134 (0x85100086) Fatal Condition when launching the World of Warcraft on Windows. As some affected users have reported, this can be facilitated by outdated / partially corrupted GPU drivers that are missing some key dependencies that are actively used by the game.

If this is the root cause of the problem, you should be able to fix the issue by updating the GPU drivers + the physics module that is handling the in-game graphics.

In case this scenario is applicable and you haven’t updated your GPU drivers in a while, follow the instructions below for step by step instructions to uninstall the current GPU drivers and reinstall the latest versions in order to fix the World of Warcraft Error #134:

In case you’re still encountering the same error message even after updating your GPU & physics drivers, move down to the next potential fix below.

‘There’S A Problem With Your Office License’ – Why It Happens And To Fix It?