Crystar had a bit of a lull in difficulty with the Nanana boss fight. She was slippery and annoying, but not much of a threat. Nanana is back with a vengeance, however, and this time, she brought the insatiate rage of a rejected anime side character. Enter, Epicurus – not to be mistaken for Epicurean.

Epicurus is Nanana’s Aberrant Transformation, and as jargony as that may seem, just means her ‘Final Form’. Epicurus is a scythe-wielding bringer of death, and more or less functions as Nanana’s Guardian – only it’s always active. If you were a bit disappointed with Nanana’s first showing, then this one might satisfy that itch…probably not though. 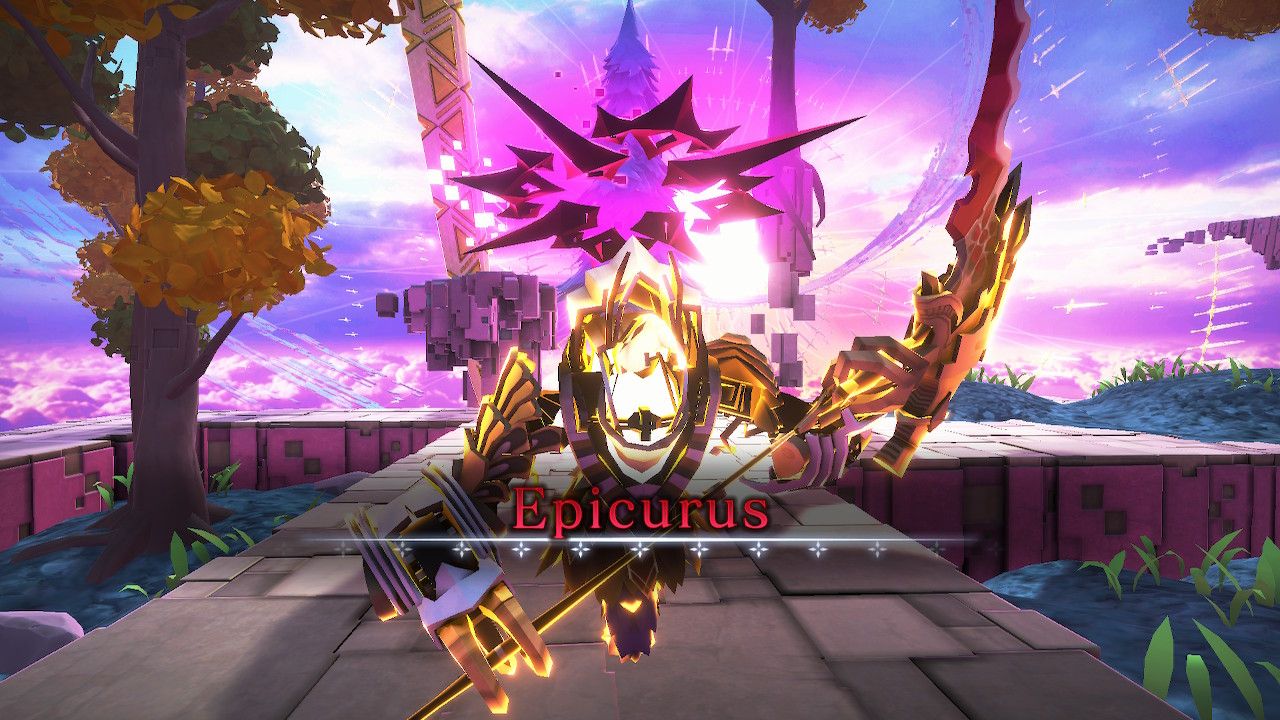 Epicurus had the potential to be somewhat of a threat. It has three forms of attack, and all three are moderately dangerous if you get hit by them enough. Unfortunately, Epicurus acts a lot like Nanana, and this fight ends up being a bit underwhelming.

Epicurus can either throw projectiles out in a cone, launch pencils in every direction or lob an egg-shaped bomb. The downside? Epicurus will do none of these attacks if you are close to it. Instead, it will opt to slowly float away in an attempt to get into a range where its AI will allow it to throw projectiles.

Epicurus may look like this scythe-wielding bag of awesome, but mechanically, it doesn’t do anything. Heck, it doesn’t even use its scythe. 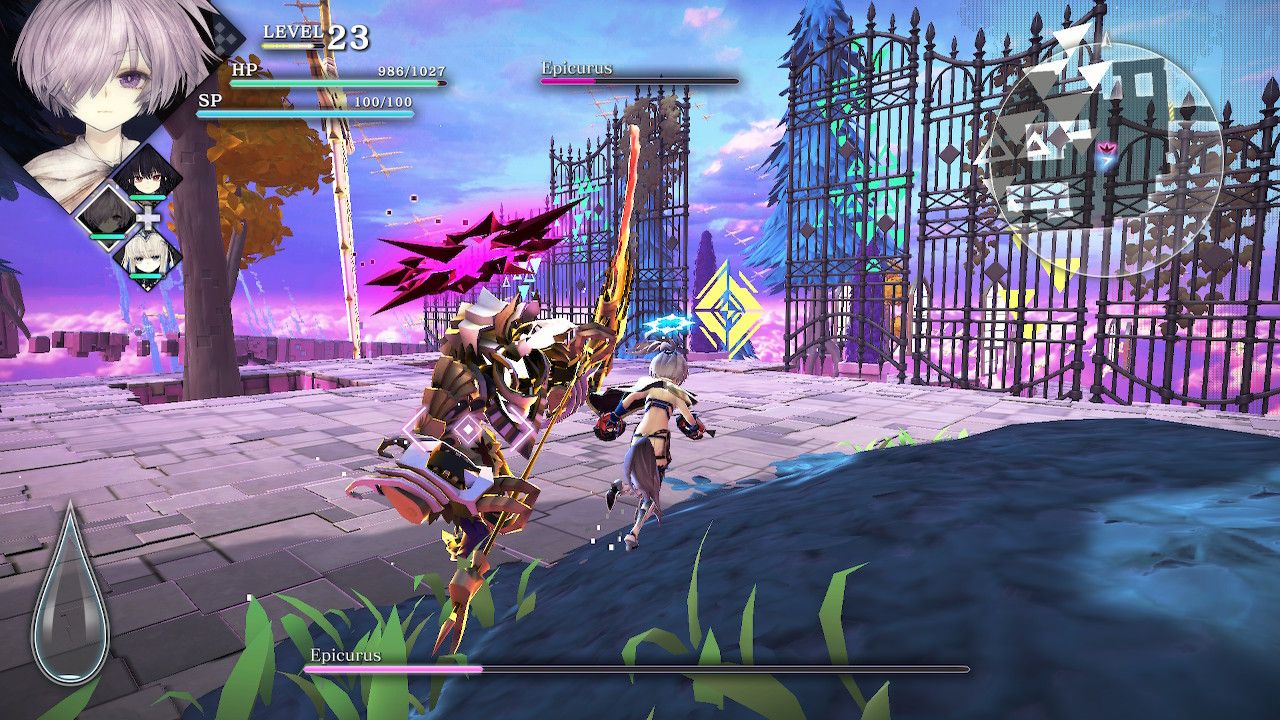 Which Party Members To Use

Because Epicurus is so lackluster, it doesn’t really matter who you use. Rei is the obvious candidate, however, as her skills and attacks are just too good to pass up. Kokoro’s range can be a pain to deal with, and Sen is continuing to fall off as her stats refuse to budge due to awful scaling.

Which Skills To Use

Unlike Nanana, Epicurus can’t be launched. This means you won’t have the opportunity to use spells like Tornado or do extended combos. Because of this, you are limited in what you can use to fight Epicurus. Power Slash is your best bet as it deals great damage and has a bit of range to it, but Spin Slash can do work too.

You can also consider using something like Nail Feather or Feather Edge, as these give you some ranged capability. Just be aware staying back and using ranged abilities will allow Epicurus to attack you.

Pick Up Some Items

Whilst not needed for the fight itself, you may as well pick up some healing before fighting Epicurus. It’s always good to get into the habit of restocking your supplies. Whilst you’re there, you can also nab a handful of Panellets. This item temporarily buffs one character’s ATK stat, giving them a nice boost to their damage.

Epicurus isn’t a damage check or anything fancy like that, but it does have a beefy health bar. Boosting your damage, so you can end the fight faster just makes sense. Whilst you’re at it, consider nabbing some Sfogliatella too. These boost your defense.

Having Rei, Sen, and Kokoro rocking full Tear Gauges before the fight begins will result in a pretty easy encounter. Just cycle between your character’s Guardian forms and have fun. If you are buffing Rei with Panellets, however, just make sure Rei has a full gauge, and pop her Guardian form at the start of the fight, or, when she has roughly a fifth of her HP remaining for a quick execution. 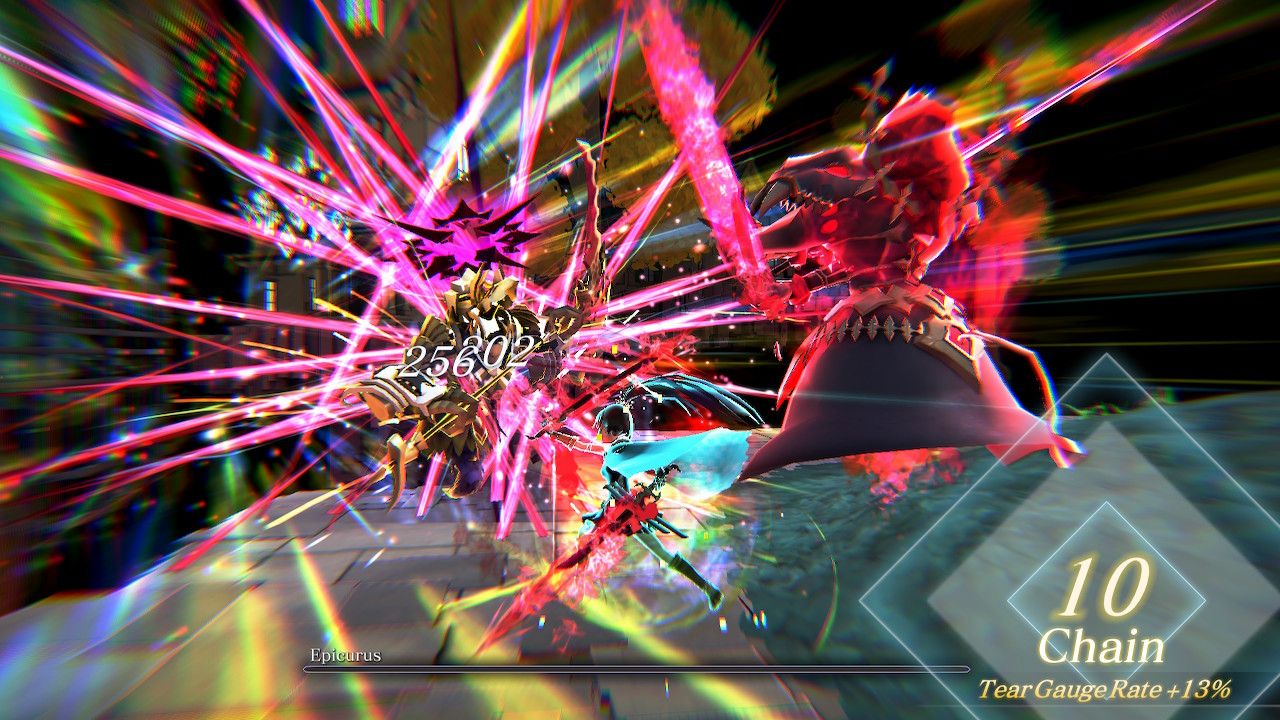 Epicurus is less of a threat than Nanana, and since it’s so slow, is significantly less annoying to deal with. At the start of the fight, eat some Panellets, and stick to Epicurus at all costs. Every time it moves away, dash back into range and continue your offensive.

To maximize your damage, try to end every combo with either Power Slash or Spin Slice. This will shorten the recovery between your attacks, and give you that added little boost.

Once Epicurus has dropped to roughly one-fifth of her total HP, pop your Guardian and lay into it with everything you have. This should rapidly deplete its remaining health, and its finisher should do enough damage to end the fight.

Alternatively, you could start with Rei, pop her Guardian and smack Epicurus around. Once Rei has drained her gauge, swap to Sen and repeat. Ideally, you want to force Epicurus into a corner at this point. This is because your final swap will be to Kokoro, whose range is a bit crap even in her Guardian form. Kokoro should be able to finish the fight. If not, swap to Rei and hit her a few times.

Epicurus is down, it’s time to move on.