Nothing tops the visual efflorescence of a graphically demanding game, which is brought about by a highly capable graphics card. For such graphical needs, NVIDIA unveiled their graphics card to shoulder Titan XP with its value and robust features, in 2017. They trimmed down its memory to 11 GBs of DDR5X memory compared to 12 GBs of TITAN X but at a higher speed to substantially increase memory throughput to make this new GPU’s case more convincing. In Our Complete Best GTX 1080 Ti Guide, we will consider a list of factors, these include, price, performance, overclocking, specifications, and more. 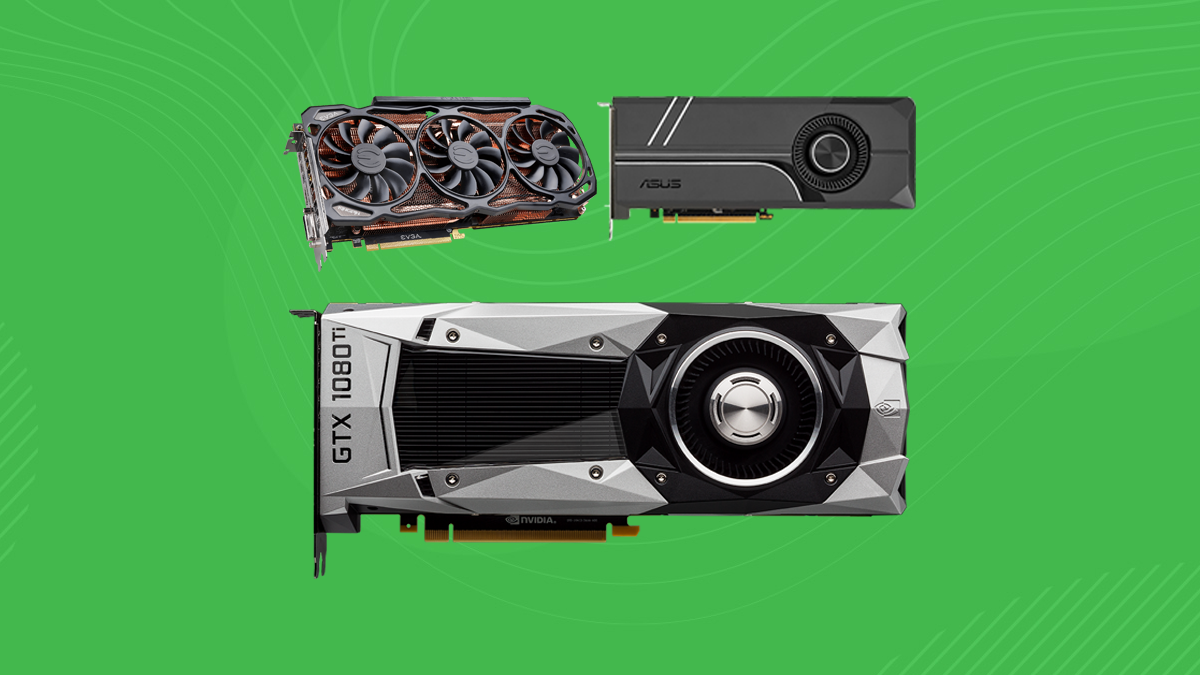 Moreover, it is coming with lower Bus Width of 352-BIT as opposed to 384-BIT with the same number of Transistors, CUDAS cores. Lastly, If you’re spending this much money on a card, do yourself a massive favor, and get a G-Sync Monitor. Also, If you are confused between GTX 1080 vs 1080 Ti, read this guide.

Our Recommendations For Best GTX 1080 Ti 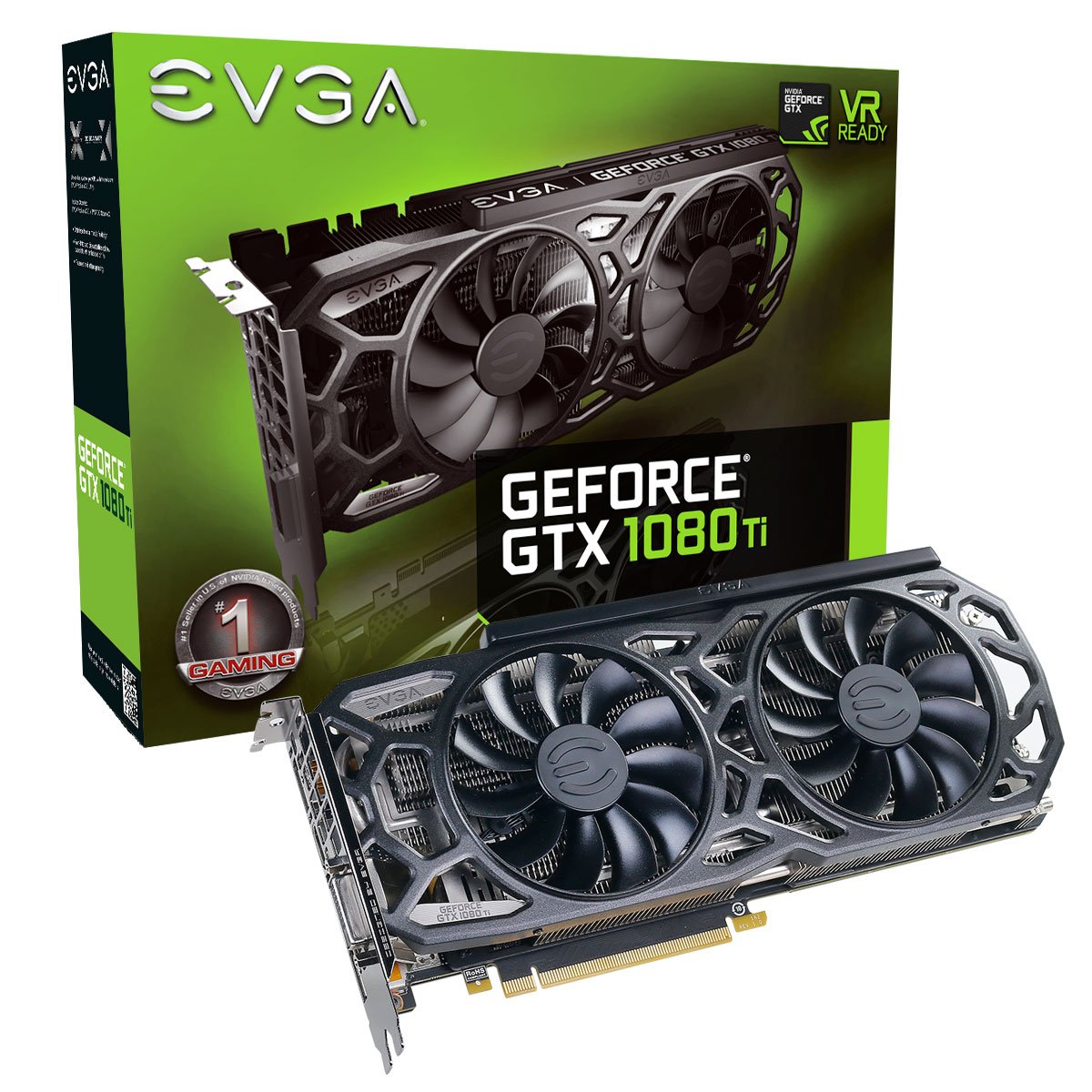 Enthroned at the top spot is EVGA’s beast of a graphics card inundating your game with impressive frame rates at high video qualities like 2k and 4k without breaking a sweat. Its real base clock pegs at 1556 MHz while the Real boost clock at 1670 MHz.

It requires a minimum of 600 Watt power supply. Moreover, it is armed with a 6-pin and 8-pin PCI-E power connector with a total power draw of 250 Watts. It comes with a power link connector which will neatly guide your cables from the top of the card down to the back.

EVGA has successfully concocted a sublime cooling system to meet the heavy workload of this card. It has redesigned cooling with L-shaped fins to improve contact surface area for better heat dissipation and two 120mm fans to breeze you through the game. They’ve really gone overboard with their EVGA iCX cooling to palliate all the rants from the previous 1080 cards overheating concerns.

The card’s max temp reaches 73 degrees C at 4k Witcher 3 which is very good for a 2 slot design. This card has all sorts of ways to quickly notify you of the current running condition of the card via the EVGA software or simply by looking at the 3 temperatures indicating LEDs in the card (assuming your case has a window). In terms of compatibility, it supports Windows 10 32/64bit, Windows 8 32/64bit, Windows 7 32/64bit, DX12 OSD with EVGA Precision XOC, and you can stream extreme GeForce GTX PC gaming experiences to a portable device like NVIDIA SHIELD with super-smooth, low-latency performance.

The card is extremely well built and the thermal sensors are a great feature in ensuring everything is running normally. We can highly recommend this card for 1440p 144hz gaming or 4k 60hz depending on your setup. Just ensure you have a powerful CPU for the 144fps at 1440p.

This is an exemplary card that excels in visual finesse along with its overclocking prowess shining at the memory clock speeds of 1470 MHz and load clock speeds of 2025 MHz without touching any voltage fluctuation. It is the only GTX1080 Ti that consumes 300W under heavy load.

This card can easily handle 1440p at 40 fps. We ran heavy games like Witcher 3 and observed a constant 100 fps on the Predator x34 (100 Hz, 3440x1440p ultrawide) with maxed-out settings. Overall, it displayed a 5-6% increase in average frame rates from the founder’s edition, especially outshining it at the 4K performance. It is 5K Gaming and VR Ready with 2x HDMI 2.0, 2x DisplayPort 1.4, and 1x DVI port to simultaneously connect your VR headset and up to 4 monitors.

The heat dissipation system is the major highlight of this card with its open-air shrouds boasting a sturdy plastic construction with minimum flecks inspiring the card’s confidence in quality, meanwhile, a trio of patented wing-blade 90 mm fans stay frozen at lower temps to eliminate noise emissions and push air downwards into a quintet of 6 mm heat pipes joining two aluminum heat sinks one of which supports copper heat spreader that provides twice as much contact with the GPU.

The Fintech itself allegedly features 40% more surface area over the previous slot 2 designs consequently restraining the thermals at 70 degrees C at load clocks, 15 degrees lower temperatures from the founder’s edition. The 6 and 8 pin PCIe power plug is made of premium alloy components to curtail power loss with additional connectivity. ASUS 2 fan users get a pair of PWM fan headers which can be automatically controlled based on GPU or CPU thermals.

The AURA-supported RGB headers are conveniently placed at the front of the card for easy access. GPU Tweak II makes monitoring performance and streaming easier than ever, featuring Game Booster and a free 1-year premium license of XSplit Gamecaster. Furthermore, you’ll get two SLI fingers at their familiar spots allowing you to hit earth-shattering frame rates with two-way SLI. Despite its steep price tag, this card offers everything a gamer could ask for

3rd batter in our list is the 3-slot graphics card blossoming with RGB lights all over it, a traditional GIGABYTE treat. Taking a peek at its clock speed specifications, it displays Core Clock (MHz): 1708/1594 (Boost/Base) in OC Mode and 1683/1569 (Boost/Base) in Gaming Mode.

We pushed it further up to draw out overclocking speeds of 2076 MHz, not a huge leap from the founder’s addition but worth a mention. The same goes for its performance with the frame rates, it gave satisfying results similar to the other 1080 Ti cards from the list. They’ve moved their HDMI ports to its rich rear output shield with six outputs namely, two HDMI 2.0, a DVI, and three Display ports, albeit you can’t use the HDMI and DVI simultaneously. It is built with 12+2 Power Phases.

One of the most glaring features of this graphics card is the inclusion of a  copper heat sink on the backside of the GPU. This copper backplate allows a more effective heat dissipation from the back. It has five 5mm heat pipes on its copper base heatsink adequately in touch with all the onboard components.

We’ve got three 100 mm fans designed with an adequate amount of fins for developing an immense amount of static pressure on it with the center fan overlapping the other two. How can we forget the good old RGB fusion, stacking up a constellation of color customizations easily configurable from the software giving your those awe-inspiring visuals with RGB lit logos on the front and sides?

Additionally, it has a fan-stop logo that will light up to inform you that fans are not working. We observed temperatures all the way up to 68-69 degrees depending on the loads with high fan curves which were safe of accompanying high acoustics that usually arise at high loads. All-in-all it is a very good investment especially for the RGB Fusion enthusiasts who are sick of coil whines.

ZOTAC has redeemed itself with its new hefty card, probably the biggest in the market, with 3 slots backed with a massive heatsink. Its boost clock measures up to 1759 MHz and the base clock at 1645 MHz. You can max out its boosted clock speeds up to 2037 MHz.

In terms of performance, it truly lived up to the appellation of a 1080 Ti board with impressive frame rates while restraining the thermals around 62-65 degrees, all thanks to its bodacious heatsinks. Moreover, they’ve included more RGB lights on the top. It has two 8 pin PCIe power connectors in contrast to other cards as it sucks 270-watt max power and you are recommended to have a 600 Watt power supply ready for it. At the rear, we have three DisplayPort 1.4s, HDMI 2.0 ports for VR, and dual-link DVI.

Rest assured, thermal conscious individuals, its large build is not for show, most of its space is allocated for the aluminum heatsinks with 6 heat pipes underneath, five of them protruding out of the card, and three large fans consequently making up to the 3 slots thickness of this card. There are digital LEDs on the top and bottom having very fluid transitions. This humongous build is backed with a strong power solution of 16+2 phases and its VRM has a separate small heatsink. People who are faced with the problem of fans not turning on, just download the new version of Firestorm from Zotac and preset the fan speeds based on temp, the fans spun around 60% and with the 4th fan it is more than enough to keep the GPU running at 35c.

When we talk about its acoustics, it is not the quietest car out there, nonetheless, it will not emit excessive noise at load speeds. Lastly, it is compatible with Microsoft DirectX 12 (feature level 12_1), OpenGL 4.5, OpenCL, and Microsoft Windows 10/8/7 x86/x64. To conclude, this card is nothing short of a beast and you might want to try this out if you have a sturdy and spacious case build.

OC’d out of the box

Last but not least, this entry is similar in design to the previous MSI Gaming X generations, with an included backplate (a big plus in looks as well as protecting the circuit board from dust) as well as increased thickness due to a larger heat sink. Its boost clocks run at 1683 MHz and base clocks at 1569 MHz in OC mode while 1657 MHz in boost and 1544 MHz at base speeds in Gaming Mode.

Needless to say, it pretty much slays in terms of high frame rates at 1440p as well as 4K resolutions without breaking a sweat. To power this card, we have two 8 pin PCIe power connectors in the back and two SLI bridge connections in the front. Outputs are as follows: three display ports, one HDMI, and one DVI-D.

Pascal is built to meet the demands of next-generation displays, including VR, ultra-high-resolution, and multiple monitors. The TDP for this card at stock is 250 watts but we advise you to get the 600 Watt power supply for this one as well.

It has a twin Frozer cooler design with red LEDs on the back. Hidden beneath the outer shell is the custom matte black PCB accompanied by this pretty beefy aluminum heatsink, intertwined with six heat pipes, which covers the whole length of the card touching every component, hence the card is a bit taller than the typical dual-slot design.

MSI also doubled up the metal plates with this model, so besides the expected backplate on the bottom side, there is also a plate that surrounds the GPU from the topside, sandwiched between the heatsink and the PCB, and directly goes onto the GDDR5X video memory to take extra heat off of it along with the amped-up sturdiness of the card.

To top it off, we have a pair of MSI’s 100 mm TORX 2.0 fans to bring in the air current upon the respective components.  Each LED has individual controls by choosing any of the animation effects available in the MSI Gaming App, ranging from responding to your game sounds or music to steady light, breathing, and flashing. Of course, you can also turn them off.

The software comes with a simple one-button overclock setting as well as the ability for setting custom clocks/voltages via MSI Afterburner. In conclusion, it was really a tough-brainer to even put this impressive card at the bottom of this list in light of its promising features, MSI has been on top of their game and this is a fine example of that.

We may earn a commission for purchases made through our links. Learn More

Hitman Becomes Profitable For Io Interactive In Under A Week

What Does The Acronym ‘Bae’ Stand For

Air Cooler Vs Water Cooler: Which One Is Better And Why?